Yonezawa Assemblage brought to you by the four sake breweries of Yonezawa will be on sale from December 1st at restaurants in Yonezawa City. 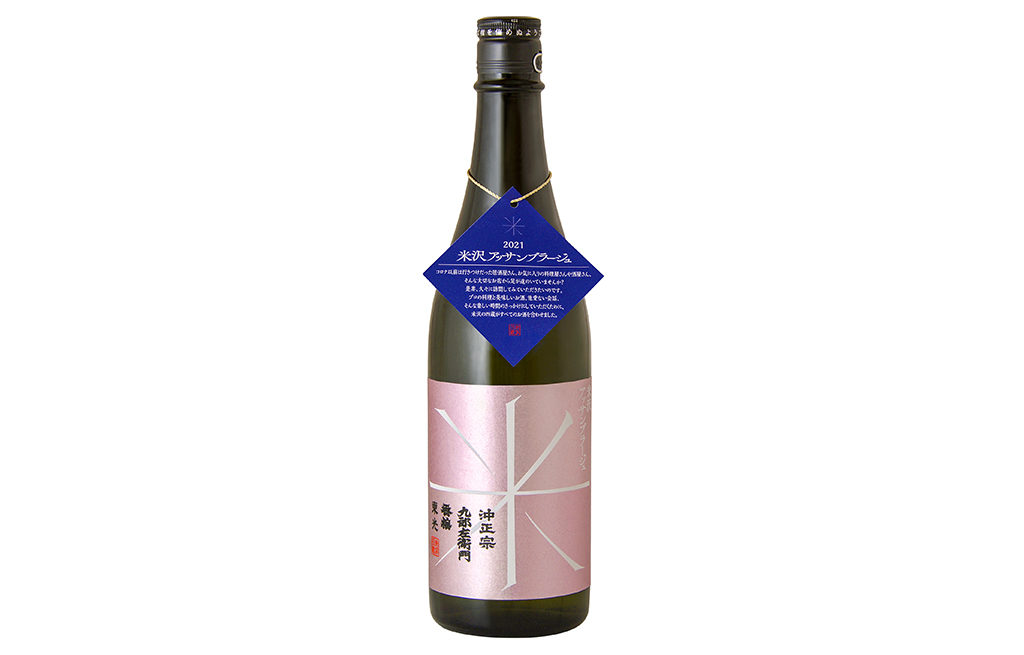 Yonezawa Assemblage is a limited blended sake of Yonezawa’s four sake breweries. It will be sold in advance to restaurants in Yonezawa City from December 1st and will be sold only at restaurants for about 2 weeks after its release.

What is Assemblage?
Assemblage is a technique mainly used in wine that blends multiple wines to create a taste that cannot be made by itself.

Message from the four sake breweries
To all of the Izakaya which we went to before covid, to all our favorite restaurants and liquor stores, do you feel distant from those beloved stores? After such a long time, it is time to start going back.
With professional food, delicious alcohol, and passing conversation, in order to give you an opportunity to come back you your favorite spot the four sake breweries of Yonezawa have come together to make this sake.
We hope that everyone will go out and enjoy themselves at restaurants in Yonezawa.

We are very proud to announce that Kojima Sohonten’s Kome Koji Amasake series won the “Excellent Design Award” at “Yamagata Excellent Design 2021”, which selects the best designs in Yamagata.

88 items (72 companies) were exhibited. Out of these, a total of 16 items were selected as excellent designs, and 8 companies and 2 organizations that are expected to play an active role in future efforts of the prefecture were selected as incentive companies.
We hope that the award will give you more opportunities to find this product.

About Kome Koji Amasake
A drinkable type amazake smoothie. The vitamins from amazake along with blessings of vegetables and fruits are combined to create a light drink that is full of nourishment. It is non-alcoholic and contains no sugar, fragrances, colorings or preservatives.
Please purchase from the Amasake brand site. 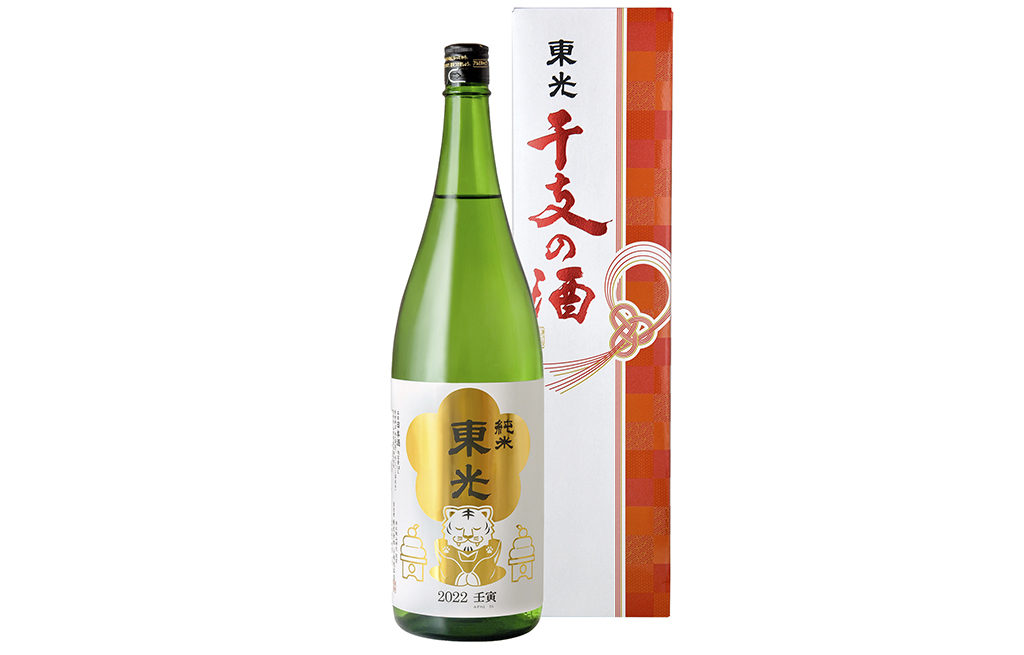 Each zodiac has its own meaning, and in 2022, “Yang Water Tiger” (Mizunoe / Tora) means to bring cheerfulness and helps the movement of spring. If the situation this year was harsh in winter this year, we hope that 2022 will be a year full of hope with the arrival of spring. 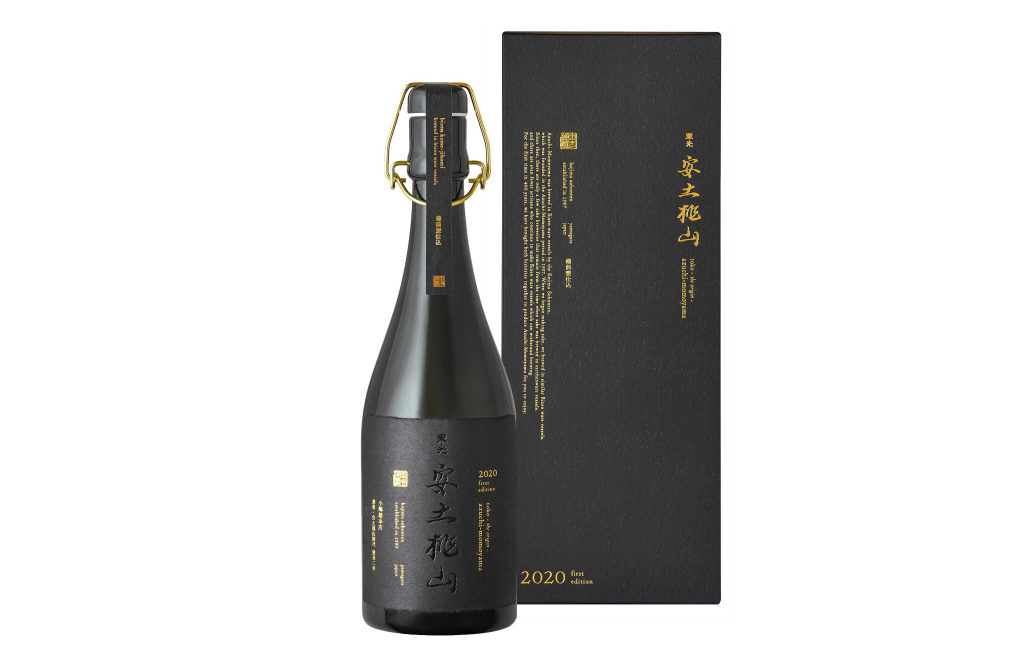 From Friday, December 3rd
A limited number of Toko Azuchi Momoyama brewed in Bizen-ware vessels will go on sale.

Kojima Sohonten, founded in the Azuchi Momoyama period, 1597, is proud to announce its newest sake, Toko Azuchi Momoyama. This sake is brewed in Bizen-ware vessels just as our first sake was 424 years ago.

In 2019 when Kenichiro Kojima of Kojima Sohonten met the Bizen-ware artisan, Hiroyuki Matsui. With this encounter, the Azuchi Momoyama project and a return to the brewery’s roots began.

The first sake was made mainly from Kamenoo from Yamagata prefecture. In addition, some rice (Tsuyahime, one of the descendants of Kamenoo) cultivated at the Uesugi Shrine in the rice field where Lord Uesugi Yozan plowed the land himself. This rice was specially given to us by the Uesugi shrine to brew sake. Following the historical methods, we polished the Tsuyahime to 90%. 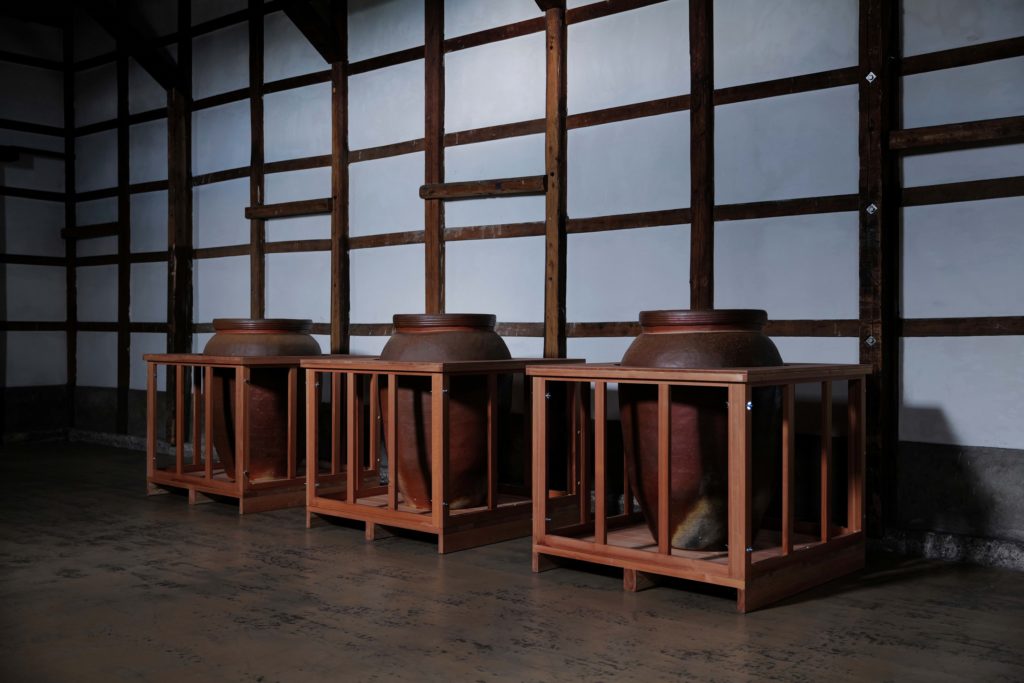 About Bizen Kame-jikomi
Since the Jomon period, earthenware has been used for sake brewing in Japan. Kojima Sohonten, retains the Bizen vessels it used at the time of its founding. It is probable that our original the Bizen vessels were carried to Yamagata by the Kitamaebune from distant Bizen.

Then in the Edo period, wooden barrels, which were much larger than the previous earthenware jars, became widespread and sake became mass-produced, leading to the disappearance of earthenware brewing. Since the Showa era, the leading role of brewing containers has changed from wooden tubs to enamel tanks and stainless-steel tanks. For this reason, we are one of the few breweries in Japan to continue this earthenware brewing method.

Earthenware vessels are much smaller than modern tanks, are delicate to handle, and are extremely inefficient. However, by brewing in earthenware that has not been glazed, microorganisms can inhabit the fine pores and create a complex flavor. It has been said to be similar to licking stone.

For the first time in 424 years, we are proud to produce a limited number of bottles under the name, Azuchi Momoyama. 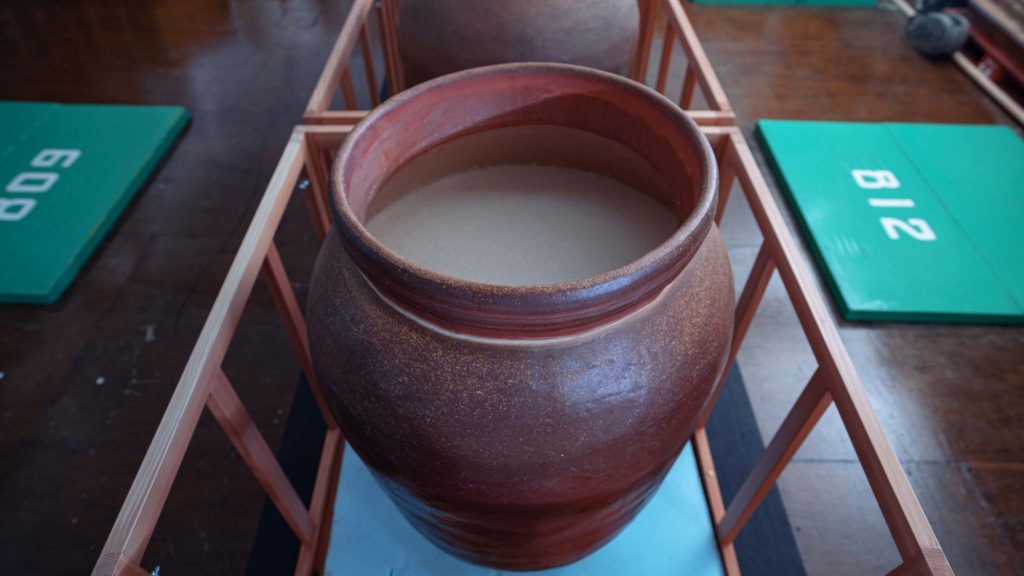 About the Artisan, Hiroyuki Matsui
Hiroyuki Matsui is one of the few Bizen-ware artisans who still makes mitsuishi vessels. These vessels are prized for their practicality and their beauty is not found through art but through their usefulness. Kenichiro Kojima decided to resume brewing in bizen-ware vessels again while deepening his understanding of Bizen-ware history, when he met Mr. Matsui. 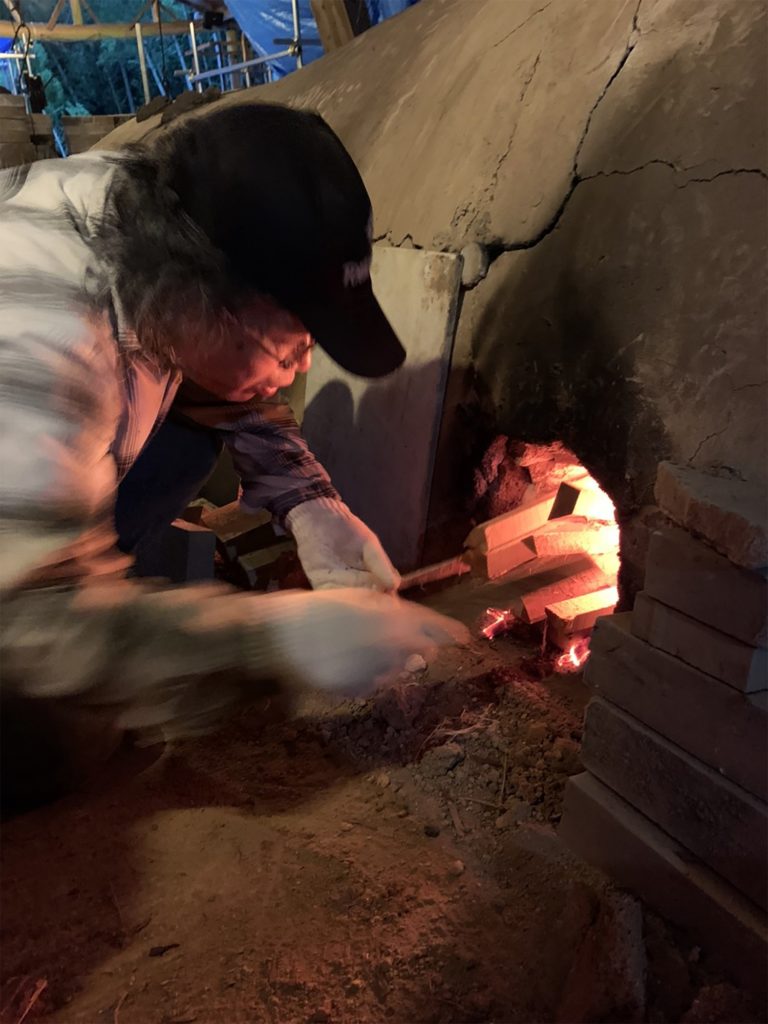 Flavor profile from Kenichiro Kojima
This is a new style of sake that is brewed in Bizen vessels without glaze. In the first edition, you can clearly feel the minerality, like licking stone. The lactic acid bacteria of the moto and the acidity makes you taste the earthiness, and the gentle aroma is reminiscent of melon and pear. Compared to Toko’s fruity and clean style, it has a more complex and has a powerful finish. We hope that you can enjoy it as it warms from cold to room temperature. I also suggest drinking it in a sakazuki type glass. 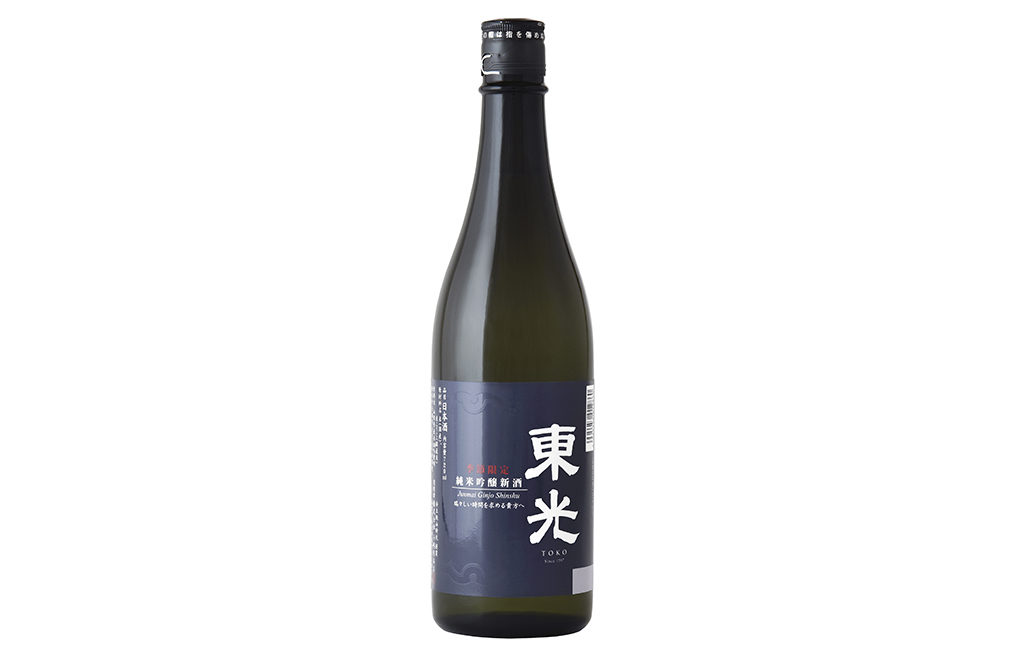 Junmai Ginjo Shinshu has a rich and bold with flavor and popping with freshness of just pressed sake.
It is an unfiltered genshu that not been cut with water, but since it has been pasteurized, you can enjoy a deep, mellow taste.

Toko Chokarakuchi Junmai Ginjo, a sake with a superb sharpness, to be released on March 18, Wednesday. 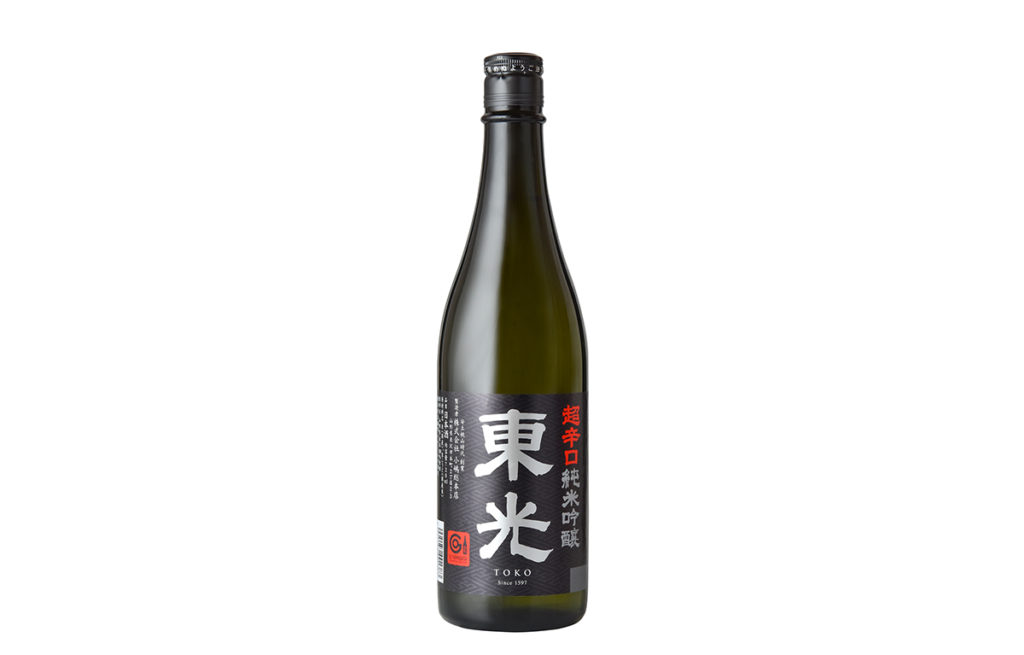 We are proud to announce that the newest sake to come out of Toko, Chokarakuchi Junmai Ginjo, will be released on March 18 (Wed), 2020.
A super dry sake with a delict aroma and a clear finish.
It has a beautiful finish that pairs extraordinarily well with any meal.
The umami of rice along with the sharpness of Chokarakuchi is truly unique.

We have updated our products.